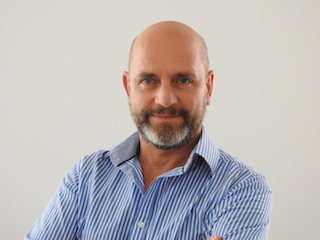 Sevenpointfive was started by Garth Kent,who after suffering for 8 years with Systemic Lupus Erythematosus (SLE), found a way to Cleanse, Nourish and Balance his body to overcome this incurable disease.

The lupus was misdiagnosed for 3 years while Garth suffered from debilitating headaches that made him unable to work. The headaches would be so bad, Garth’s entire body would spasm and a morphine injection would be the only way to get it under control. He became exceptionally light and heat sensitive, often not even able to leave his bedroom. He also experienced thromboses, one even around his eye.

When doctors insisted on him taking Prednisone, the standard Lupus treatment, Garth’s joints were damaged so badly, he was unable to walk or even wash himself. He had to use an electric wheelchair to get around. The treatment triggered Discoid Lupus which caused lesions on his body and septic arthritis, even necessitating an operation to relieve abscesses of all their contents. Garth tried every option available at the time, from conventional medicine to alternative therapies to accupuncture, traveling around the world to try and find a cure for his lupus.

After learning about the importance of pH and a balanced body, he began using natural products to achieve a balanced pH of 7.5. He has been free of morphine, valium and schedule 5 painkillers since 1998, and the “incurable” SLE no longer ravages his body. He has since been helping people around the world achieve this balance too. He now trains others to use Live Blood Analysis to help them help others identify imbalances and monitor their progress. This system is unique in that it blends science and nature, using modern technology to pinpoint the body’s imbalances, and then using natural supplements to allow the body to eliminate the cause of the problem.

Garth’s friends and family were so impressed with his dramatic recovery that they started to use the same protocol of Cleansing, Nourishing and Balancing their bodies for themselves. Due to the amazing results that touched the lives of many since its inception, Sevenpointfive branches have spread throughout South Africa and overseas. Garth is proud of the fact that most of the Sevenpointfive franchises and consultants started out as clients who were so impressed by their own progress that they were inspired to help others and underwent training to achieve that goal.

What brought you to Sevenpointfive?I was referred by a friend as I was concerned about my thyroid function as... read more

Bone density and Cysts – my doctor couldn’t believe my progress

Two years ago I went for my mammogram and bone density tests. There were cysts present in my mammogram... read more

ADHD and Mindset – the natural miracle

Clinton and I wish to express our heartfelt thanks and appreciation for the simply wonderful and if I might... read more

My mother-in-law, Vera Botha, of 23 Somerset Rd, Widenham, spoke to a colleague of yours about my daughter Marisca... read more

What brought you to Sevenpointfive?I was recommended by Dr Diane Peterson for severe hot flushes and being pre-diabetic.What was... read more

Varsity life is hectic! It’s been years of drinking excessively, smoking (excessively) and eating on the run, and my... read more

I wanted to wait a full month before I wrote this testimonial, to see if my monthly cycle had... read more

Headaches, nausea and pains – I feel like a million bucks!

I have been very unhealthy for a very long time - I thought I was dying.I had exhausted my... read more

What brought you to Sevenpointfive?A friend told me about it. I had Lupus and constant headaches.What other methods of healing... read more

Jaundice: The colour in my eyes cleared up

What brought you to Sevenpointfive?A friend of mine referred me when she saw and heard how I failed to... read more